Announced Tuesday in celebration of Star Wars Day on May the 4th, the first-of-its-kind experience will include accommodations in themed cabins with views of the galaxy beyond, unique dining and one-of-a-kind entertainment.

It begins at check-in at the Star Wars: Galactic Starcruiser terminal. From there, guests will enter a Launch Pod to begin their own personal Star Wars story, making their way toward the Halcyon starcruiser.

Inside, guests will dive into a multi-day, interactive story featuring members of the crew, other passengers and familiar Star Wars characters.

“Guests may encounter the starcruiser’s strong and charismatic captain, the ship’s plucky mechanic, heroes of the Resistance or many more as they choose alliances and chart their courses,” Walt Disney World’s announcement states.

Guests will have an opportunity to learn the ancient ways of the iconic lightsaber and even face off against a training remote as well as visit the starcruiser’s Bridge to learn about its navigation and defense systems and how to operate them.

Other onboard highlights will include a supper club called the Crown of Corellia Dining Room, which will serve breakfast and lunch daily before transitioning into a lavish multi-course menu for dinner each evening.

“One night’s dinner will feature a live performance from a galactic superstar who can captivate an entire room with the crook of her jewel-encrusted purple Twi’lek finger,” Disney teased. 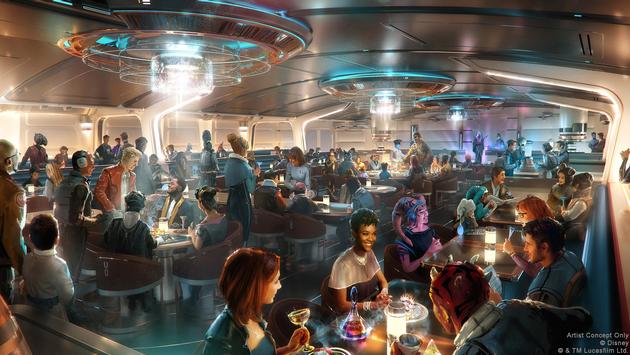 Guests will also embark on an excursion to the planet Batuu, where they’ll explore the winding pathways of Black Spire Outpost and uncover a hidden Resistance base.

Star Wars: Galactic Starcruiser guests will be the first to see their favorite characters like Rey using a new lightsaber designed by Walt Disney Imagineering Research and Development designed to be more realistic.

For a limited time, guests visiting Disney’s Hollywood Studios can view a model of the Halcyon starcruiser on display inside Walt Disney Presents.

Visit starwarsgalacticstarcruiser.com for more details and to sign up to receive the latest updates.